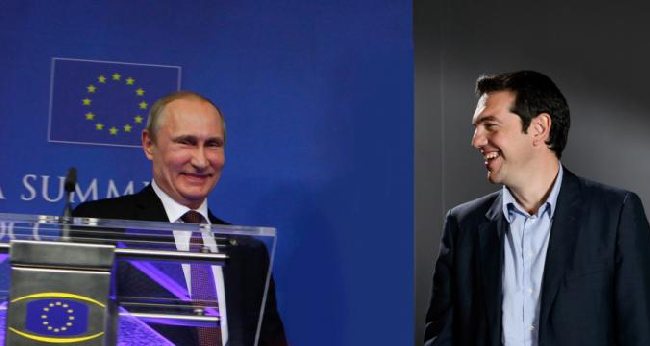 Greek Prime Minister Alexis Tsipras’ visit to Moscow has turned a new leaf in Russian-Greek relations, in defiance of the EU’s neocolonial approach towards Greece, local commentators say. The PM never intended to ask for cash, focusing on improving ties.

“The previous Prime Minister Antonis Samaras was the first in decades not to visit Moscow and not to have high-ranking official meetings…probably because of the way that European Union, Brussels and Germany imposed this neocolonial approach towards Greece,” he said, noting that Greece was being cornered into toeing the EU line in foreign policy.

For the first time in years, the Greek government “tries to do something,” particularly in finding foreign economic and energy partners outside the EU, Chatzistefanou said.

“It is a new page for the Russian-Greek relationship,” he added. Tsipras came to Moscow without any plans of asking Russia for cash, according to Chatzistefanou, who quoted Greek commentators as saying that there are other ways of economic aid, like buying bonds.

“In the end of the day, it is more of a political problem and not a financial one,” he said.

The visit is unlikely to change EU’s mind on sanctions against Russia, but it might be enough to create a domino effect, Chatzistefanou argued.

“There are other countries like Portugal, Spain or even Hungary, or Czech Republic that don’t agree with these sanctions. Even within Berlin, there are some parts of the financial elite that would like a rapprochement with Russia,” Chatzistefanou said. “Greece could become a bridge by bringing a different solution.”

READ MORE: Here is what you need to know about Putin’s meeting with Tsipras

Meanwhile, the financial aspects coming out of the Tsipras’ visit are all positive in the medium-term, economist and international lawyer Nick Skrekas told RT, adding that Greek people and government coffers will not feel much of a difference in the short term.

“I don’t think he [Tsipras] has ever intended to ask Russia for cash,” Skrekas stressed. “Russia is pressed itself at the moment.”

The comments come after French President Francois Hollande and German Chancellor Angela Merkel dismissed Tsipras talks with Putin as a “sideshow” and political theater – at least, according to a popular assessment of their recent joint speech in Western media reports.

Now, the Greek PM’s going to Moscow plays well to domestic audience and it also could help with issues such as the oil and gas in Cyprus, Skrekas argues.

The Greek visit to Russia has deepened the relationship between the two countries. “Geo-strategically it makes sense. Russia has been a long-time ally of Greece. Historically we have really good ties. We are both Orthodox nations, we share a lot in terms of culture and we swap a lot of ideas,” he added.

Skrekas agreed that EU has made up its mind when it comes to sanctions against Russia and Greece does not have the power to change that.