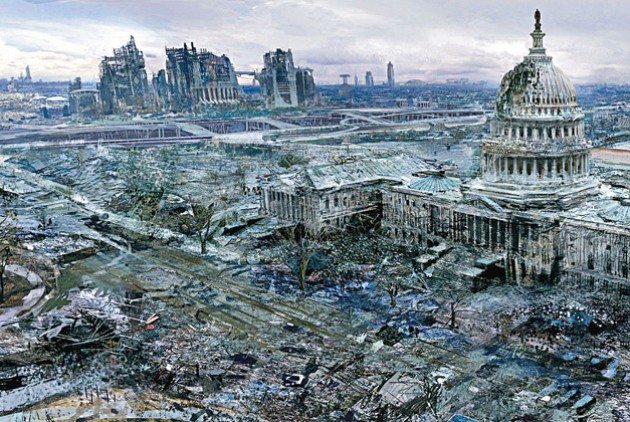 What if we bomb Washington?

The principles of International Law have constantly been distorted by the West for decades in an attempt to justify “humanitarian intervention” against tyrannical regimes.

Spring 2008: Myanmar encounters the worst natural disaster of its history, Cyclone Nargis that left behind one million homeless and caused 138,000 deaths.

The country’s dictators were incapable of managing the crisis but, at the same time, denied foreign aid. The French Foreign Minister, Bernard Kouchner, along with members of the American Pentagon put forward a “splendid” idea: The U.N could invade the country to aid its people.

Kouchner’s proposal was the most extreme example of the so-called RtP (Responsibility to Protect) – a theoretical conception which allows the international community to intervene on countries where crimes against the populace are being committed. According to the theory, “sovereignty is not a right but a responsibility”

After its first implementation, during the NATO bombing of Serbia that put an end to the Westphalian sovereignty, every single Western military intervention has been infused with the spirit of the RtP.

In Yugoslavia, the West had to protect the minorities of Kosovo – In Iraq, the Kurdish population and the Iraqi citizens that suffered under Saddam’s tyrannical regime.

Libya was bombed on the pretext of protecting its people from Gadhafi, while in Syria, American and French forces financed radical Islamic groups to “protect” the populace against Assad.

In order to prove that the actions of a targeted leader are a threat to the entire planet, international media compare him to Hitler and talk about his immerse wealth and the state of poverty under which his people live, right before every invasion.

But what would happen if all the arguments that have been used against foreign leaders were to turn against Trump’s USA?

The American superpower undoubtedly has weapons of mass destruction and is the only country that has actually used them on urban centers. According to estimates, after the end of WW2, USA has conducted military operations on at least 37 countries, that resulted to the deaths of millions.

The people you liberate will witness the honorable and decent spirit of the American military.
George Bush

Today, USA maintains special operation units on 133 countries -that’s 70% of the planet – and has recently developed military forces near the Russian borders. “Just imagine… if Russian troops were amasses at America’s borders” wrote Neil Clark a few days ago.

The scenario is obviously hypothetical and the outcome is already known since 1962: the last time that the Soviet Union developed missile systems on Cuban soil, Washington threatened with a nuclear war, despite the fact that USA was the first to develop nuclear weapons on Turkey.

It is also a proven fact that USA commits torture, and it shall continue to do so according to the new president’s promises. At the same time it maintains an international network of CIA and other American agencies.

But as we said, whats important for us today in this article is not the safety of the planet but the protection of American citizens from potentially tyrannical regimes.

The constant surveillance of millions of civilians, that Edward Snowlen revealed, is unprecedented in human history, even when compared to the most totalitarian regimes of the 20th century.

The threat for ethnic, religious and racial minorities is so great during Trumps presidency that the former secretary of state, Madeline Albtight, like many other so-called “dissidents”, declared that she is ready to convert to Islam as a demonstration of solidarity.

The division of race and class is reflected upon the prisoner ration of American prisons, were almost 2 million people live – the largest number in the world, not only as a percentage of the total population but also in total numbers.

National security suspects are being gathered at the American “Gulag” of Guantanamo without the need of inventing fake charges like Stalin did during the Moscow trials.

The recent arrest of journalists, during the anti-Trump protests and some months earlier, during the mobilization of natives at Dakota, create a dangerous precedent for the freedom of speech.

As for the American state’s ability to protect its citizens from natural disasters…BBC journalists still remember the third world- like scenery and the pictures of chaos that Hurricane Katrina left behind.

So, do we – the people of the free world – have enough reasons and legalization, according to international law, to coordinate an attack against USA under the U.N in order to protect the American population?

According to the arguments used by the western governments and media for decades, our invasion is hopelessly delayed. We could even be certain, as the American media would say, that the people of USA would welcome us as liberators.

P.S Of course if our military intervention were to cause waves of American refugees, we would not accept a single one of them on European soil.