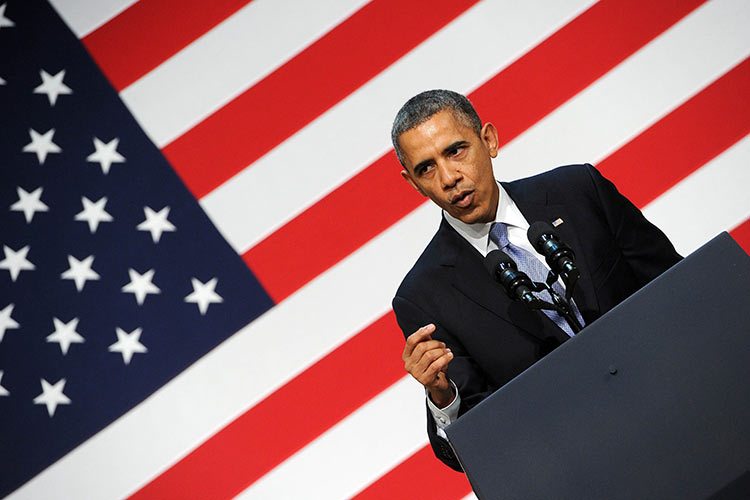 Who was the most warmongering USA president of the recent decades? The first answer that comes to the minds of billions of people around the world is George Bush. But appearances can be deceiving.

A few years ago director Sonya Kennebeck had an excellent idea. The eagle of the United States coat of arms (which was adopted during the 1782 American revolution) must be replaced by a drone.

The idea took shape through an outstanding documentary titled “National Bird” in which Kennebeck follows three drone operators (some of whom may be charged for treason) who decided to break their silence, along with the friends and relatives of a 25-people family, all of which were killed at Afghanistan during a wedding.

The documentary presents the ultimate symbol of American militarism, which is now firmly linked with the Obama presidency. Although the Unmanned Aerial Vehicle targeted-attack program launched during the years of George Bush, Obama was the one who put the seal on pentagon’s new “game”.
In fact, Obama’s army killed about 4,700 people with drones compared to the 2.996 civilians killed on 11/9.

Our lives between
Your fingers and your thumb
Can you feel anything?
Are you dead inside?
Now you can kill
From the safety of your home
With drones
Muse

The same pattern keeps repeating monotonously when someone tries to compare the war legacies of the two presidents. Bush opened the 21st century blood path, Obama paved it.
Obama did not only maintain the presence of forces that operate in Afghanistan and Iraq, he also bombed Libya, Somalia, Yemen, Pakistan ans Syria. He participated in counterterrorism operations at Nigeria, Cameroon and Uganda. He also strengthened the American forces and the armies of countries at North and West Africa and East and Central Europe. During his presidency, Pentagon’s Special Operation Forces developed across at least 133 countries, covering 70% of the planet.

As the American president leaves the White House, pentagon’s overall forces are operating in fronts that take place in more countries compared to what president Bush left behind.

The situation gets more complicated when someone tries to count the victims of the military operations ordered by the two presidents. The one million Iraqis estimated to have lost their lives after the war on Iraq, seem like a record that even the most blood thirsty of American presidents can’t break.

However that number includes the victims of the civil war that followed. –obviously caused by the instability and the “divide and conquer” policy that the pentagon and the State Department imposed.
Going through the same reasoning, the victims of Obama should not only include those killed by American bombs and bullets, but also the hundreds of thousands of people who died from the domino effect of conflicts that followed the bombing in Libya, Iraq and Afghanistan.

The hostilities in Mali and Syria, where teams of Islamic extremists that were funded by USA in Libya moved, caused hundreds of deaths, waves of refugees who keep dying by the thousands at Mediterranean and the strengthening of terrorist groups, whose actions reached the heart of Europe.
Comparing the number of victims in this chessboard of multilayer geopolitical and military conflict is therefore practically impossible. Other numbers however can be measured more accurately.

The vast increase of USA’s military spending, that reached 608 billion dollars (this year), reflects the expansion of military operations during Obama’s presidency.
In fact, the two highest “defense” budgets of the 21st century are both signed by the outgoing president, who spent 816 billion dollars more during his eight years of presidency than George bush did during his eight years. (even though the latter has been called to deal with the period that followed 9/11).

It should of course be noted that, due to the proportional increase of aerial bombings, Obama managed to fulfill the sole campaign promise that he managed to keep: to drastically reduce the number of American soldiers that are killed in combat operations.
The outgoing president leaves behind a well-set war machine. A machine that can spread death at a village in Afghanistan thanks to a single Unmanned Aerial Vehicle operator who works office hours at an airbase somewhere in Texas.