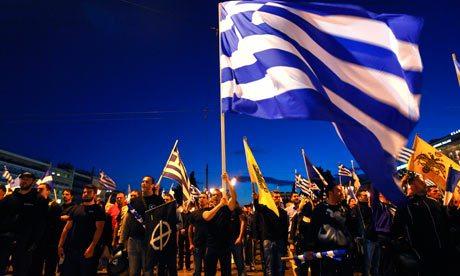 Golden Dawn, the neo-Nazi party of Greece, made a rather strange proposal this week: let’s create a new public holiday, they said, to commemorate victims of Communist guerrillas at the end of the second world war. By “victims”, they mainly refer to the Nazi collaborators who were slaughtered after ferocious battles in southern Greece. Recalling the period before and during the civil war of 1946 to 1949 doesn’t seem like the best suggestion for a debt-ridden country. Unfortunately the same idea seems to thrill the country’s mainstream media.

Hardly a day goes by without the appearance of an article in a leading newspaper that presents Golden Dawn as some kind of “golden opportunity” for Greek society. Many well-known journalists seem eager to criticise the racist violence of the neo-Nazis only so they can pour scorn on what they characterise as the excessive “violence of the left”.

“Those of us believing in democracy owe a big ‘thank you’ to Golden Dawn”wrote a columnist in Kathimerini daily, explaining that “it is an opportunity for legality to confront the quasi-legitimate violence of the left”.

The following day a columnist in To Vima daily was wondering why the violence of the blackshirts (fascist death squads in Italy) is seen as worst than the violence of hooligans or “pseudo Che Guevaras” who clash with the police.

By leftwing “violence” commentators usually refer to big strikes that can lead to social unrest in the streets or even jeering and “yogurt throwing” against politicians. When hundreds of protesters battled riot police over plans for a gold mine in northern Greece recently, a newspaper compared their action with neo-Nazi squads who have been attacking foreign workers and stabbing immigrants.

This line of argument is reminiscent of the so called “horseshoe theory” according to which the far left and the far right, rather than being at opposite ends of the political spectrum, resemble one another like the ends of a horseshoe. This idea, which was at its peak during the cold war, appears in Greece disguised as the voice of “logic” against the “violence of the extremes”. What the media seem to forget is that the country was brought to its knees by the “extremism of the political centre” – a neoliberal project that ruptured the fabric of the society and paved the way for Golden Dawn.

The 40% increase in suicides, the 50% rate of unemployment among young people and the breadlines in the centre of Athens are the result of a “systemic violence” imposed on the population by the political elites – not the “extremes”. The fact that the internal devaluation increased the sovereign debt and the economy is forecast to contract by 25% by the end of 2014 is evidence of the total failure of the policy imposed by the IMF and the EU.

Under these circumstances the violence of the neo-Nazis represents a useful distraction from the social genocide of the austerity packages, but also a unique opportunity to attack those who oppose the measures.

A few days ago the president of the Greek journalists’ association criticised the media for being “advocates” and “contractors” for the neo-Nazi party. It’s a harsh criticism, but not unfounded. For several weeks after the last general elections party members of the Golden Dawn became darlings of popular TV shows. In the meantime horrendous crimes committed by neo-Nazis against immigrants are often hushed up. The Greek media need to answer a simple question: whose side are you on?