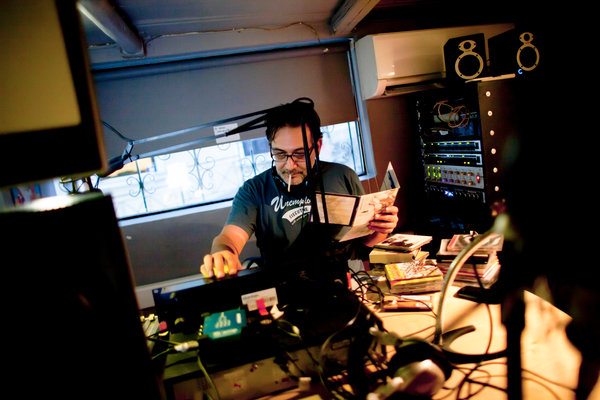 Late on a recent evening, crowds gathered at the Radio Bubble cafe in downtown Athens, drinking beer and talking politics. The cafe, in the trendy yet rough-around-the-edges Exarchia neighborhood, funds a small leftist online radio station of the same name, which broadcasts from inside.

At the sidewalk tables outside, where guests smoked hand-rolled cigarettes, the conversation inevitably turned to Prime Minister Antonis Samaras’s unilateral decision in June to shut down the state broadcaster, the Hellenic Broadcasting Corporation, known as ERT, overnight, turning an institution once seen as a bastion of patronage hires into a veritable martyr to press freedom.

“When a war begins, they send an army to protect public TV,” said Apostolis Kaparoudakis, who was a founder of Radio Bubble in 2007. “Here they sent it to close it down.”

As a song by the Beastie Boys played in the background, Mr. Kaparoudakis said he had started Radio Bubble to play good music, “which is a political act,” but also as a challenge to the mainstream news media in Greece, almost all of which is owned by the country’s business elite, who often dictate the editorial line.

The radio station, which has an active presence on Twitter, is one of many small, often left-leaning news media outlets that have cropped up in Greece in recent years. Although their audiences are still relatively modest, they are playing an increasingly vital role in the conversation, largely because they question the country’s dominant power structures.

Even before the economic crisis hit, polls showed that Greeks lacked trust in the mainstream news media almost as much as they lacked it in politicians, seeing both as intertwined in a kind of crony capitalism that helped push the country to bankruptcy.

Now, four years into the crisis, Greeks are even more skeptical of mainstream news organizations and even hungrier for information from nontraditional sources, especially if it veers from the government’s line that Greece has no alternative to the austerity policies demanded by its foreign lenders.

“There’s a great lack of trust that is no longer there,” said Ioanna Vovou, who teaches media studies at Panteion University in Athens. “It’s true that people, mostly younger people, say they have turned to alternative sources of media.”

At the same time, the economic crisis has fueled rampant speculation about the true sources of Greece’s misery, sometimes drowning reliable information in a cacophony of conspiracies. But alternative news media have increasingly tried to bridge the trust gap by fostering citizen journalism and taking on topics that remain taboo for the more established news organizations.

Some of the new sources, like Radio Bubble, the magazine Unfollow and the web portal The Press Project, lean left and are critical of Mr. Samaras’s coalition government, an uncomfortable alliance between the center-right New Democracy party and the Socialists.

The most interactive of the three, Radio Bubble urges its audience to use Twitter to send images and updates using the hashtag #rbnews during developing stories. The tweeted information helps fill out the picture of chaotic events, like street demonstrations when protesters clash with the police, who often fire tear gas.

“We call ourselves citizens’ media, not alternative media,” said Theodora Oikonomides, a former Radio Bubble editor who was a humanitarian aid worker before returning to her native Greece in 2009. Mr. Kaparoudakis added, “We don’t want listeners, we want citizens.”

He said the station came into its own in December 2008, broadcasting around the clock when riots broke out in Athens after a policeman killed a 15-year-old boy. Today, Radio Bubble has about 9,000 followers on Twitter and streams about 100,000 hours of programming each month on its online radio station. Bar revenues cover operating costs and only bar employees and the station’s two founders are paid.

Outlets like Unfollow and The Press Project are trying investigative journalism in a country that does not always embrace the undertaking. In 2013, Greece dropped 14 spots to number 84 on the Reporters Without Borders Press Freedom Index. (Finland was No. 1, Germany 17 and the United States 32.)

Unfollow, which has 7,000 to 8,000 subscribers, made a name for itself this year when it was sued by Dimitris Melissanidis, the head of Aegean Oil, after it reported on a slow-moving court case against a member of the family on fuel-smuggling charges. The smuggling charges were later dropped after the statute of limitations ran out. The magazine now faces a second defamation lawsuit for another article about a Melissanidis family enterprise.

“What we’re doing in Unfollow, we’re trying to do a job that’s impossible in the mainstream because of the connection with big enterprises that impose their views and their will,” said Aris Chatzistefanou, a co-founder of the magazine and a documentary maker whose film “Debtocracy” argues that Greece should leave the euro.

After the government shut down ERT, The Press Project ran the ERT signal on an alternative platform. (Since then, ERT has been kept in operation by about 600 unpaid employees.)

When it grabbed the ERT signal, “It was a test that we could do it, that we could provide the TV signal to the whole of Greece,” said Costas Efimeros, who started The Press Project in 2010 as a sideline to an information technology company he runs, with several profitable sports and car websites.

This month, The Press Project opened an English-language version. It also has a web television station in the works. The site does not accept advertising from banks or government organizations, “since such sources of advertising in Greece have been linked to manipulation of information,” it wrote in a mission statement.

Back in 2009, when the crisis hit, “we felt there was a big gap in the media,” Mr. Efimeros said, as he sat at a desk in the company’s office in Gazi, a trendy, formerly industrial area in downtown Athens. “We want to create a media to discuss the situation of the media in Greece,” he added.

Mr. Efimeros said that he supported Syriza, the main opposition party, in the last elections and that his web company runs sites related to the party, as well as other Greek political parties. The Press Project, some of whose contributors have also worked with The New York Times, had a scoop this month about a member of Parliament from Syriza under investigation for tax evasion, a case that tarnished the image of the party, which has cast itself as a clean alternative to the mainstream parties.

As discontent with the government grows and financially struggling channels increasingly broadcast reruns rather than original programming, alternative sites may gain even greater popularity.

“In the past year, both my parents joined Twitter,” said Janine Louloudi, 30, a freelance journalist, as she sat at the Radio Bubble cafe. “I’ve seen that shift in other people’s families, too. You’re going to see more people the age of my parents getting their news from the Internet.”

“What happened at ERT started a debate about what kind of media we want,” said another young journalist, Vassilis, who said he did not want to reveal his last name because he hosts a show for Radio Bubble under the name Polyphemus, after the mythical Cyclops. “Because,” he said, citing a variation on an old saying, “in the land of the blind, the one-eyed man sees.”