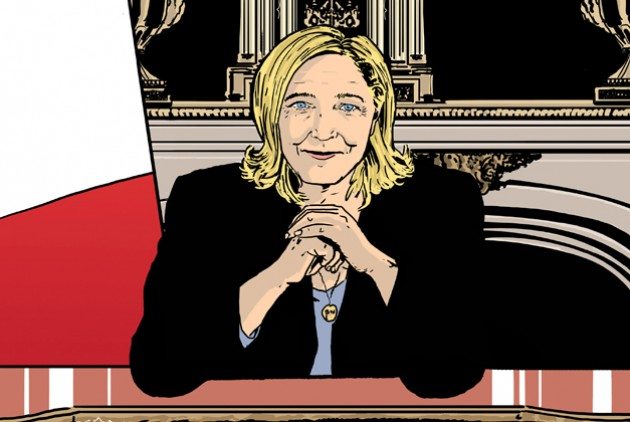 It has almost been a year since the day that the French started reading “La Presidente”, a shocking new comic-book by Francois Durpaire and Farid Boudjellal.

Being one of the best examples of the so-called “political fiction” genre, the comic attempted to predict what would happen in case Marin Le Pen’s meta-fascist party won the elections and imposed the racist program of the National Front.

Up until now the creators of “La Presidente” have made multiple mispredictions: Hilary Clinton did not become the president of the United States, Hollande will not be Le Pen’s opponent in the presidential elections and SYRIZA was not replaced by the Far Right within two years due to Tsipra’s stubbornness on keeping the country within the eurozone.

However, the biggest mistake of the comic has been made on its final pages (spoiler alert) when President Le Pen is forced to make a state of emergency declaration under the pressure of social and economic turmoil.

In the real world however, the National Front’s leader would receive a country that is already in a state of emergency. In December the French parliament voted to extend the state of emergency for the fifth time in a row and it will still be in effect after the presidential elections (even if there is a second round on May 7).

There is a small detail that the liberal criticizers of the proto-fascist and meta-fascist parties avoid to mention: That the current democratic governments have created an institutional framework that allows politicians like Donald Trump and Marine Le Pen, to rule with the same absolute power a dictator would.

Like it is written on “La Presidente” if Le Pen wanted to create an Orwellian type information base for each and every citizen, she would simply have to rely on Hollande’s legislation that allows information agencies to spy on the suspect’s telecommunications and install secret cameras and microphones without any warrant.

It is essentially a copy of some elements that are found on the Patriot’s Act that was imposed on the United States after 9/11.

Hollande’s dark legacy, however, goes beyond the surveillances and the imposed state of emergency. On his last book “Erreurs Fatales” (Mortal Mistakes), published a few weeks ago, the reporter and investigator Vincent Nouzille claimed that president Hollande has given the secret services of the French army the green light to execute at least 40 “leaders of terrorist organizations and other possible enemies of France”
Those secret operations are directed by the head of the General Headquarters, without the slightest parliamentary or judicial control and essentially reintroduce the death penalty.

Those extrajudicial executions, that took place between 2013 and 2016, are once again copies of the way that Obama used the armed forces to assassinate foreign and American citizens on foreign soil.

The American justice and legislature have lost any means of controlling any major decision that the president makes in cooperation with the Chief of Staff.

Obama could order NSA to investigate any person on the planet, to execute him with drones of the Air force, to abduct him through special CIA programs and keep him indefinitely locked at Guantanamo – which was kept operating despite Obama’s pre-election promises.

No dictator in human history had the means or the “privileges” that Obama will hand over to that clown of politics, Donald Trump.

When a president takes the role of a judge, a juror or an executioner who acts under a state of emergency, a framework of super-authorities is created that can be thoroughly transferred to an even more dangerous president.

Even in Germany, where the possibility of a far-right party rising to power seems far off, there have been recent Supreme Court decisions that allow the government to use Armed Forces within the country – something that was strictly forbidden by the German legislation since the fall of Hitler.

Like Joseph Stiglitz recently pointed out, Obama (and we would also add Hollande), through their fiscal policies, paved the way to power for politicians like Trump (and Le Pen).

But that did not happen because they “broke the rules of capitalism to save the elite”, like the American economist argues, but exactly because they followed capitalism’s user manual to the letter. And along with the fertile ground for the rise of the far-right they will also supply their successors with all the control mechanisms that they need in order to continue from where they left.

INFO
Read:
La Presidente (Published by Les Arenes)
The comic that shocked France with the realistic scenario about the Le Pen presidency… along with some simplistic approaches about the eurozone and the economic globalization.