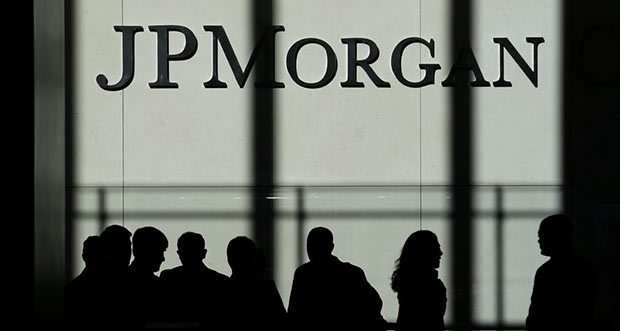 New constitutions for the European south… handmade by JP Morgan

As the political parties submit their constitutional reform proposals, we would do well to remember those who first asked for the most radical of changes: The European Union and the biggest bank of the United States.

In May 2013, the American banking giant JP Morgan presented a 16-page report which, more or less, claimed that countries of the European periphery, particularly the ones of the South, will not be able to escape the debt crisis unless they reform their Constitutions. As is written on the report; “The political systems in the periphery were established in the aftermath of dictatorship, and were defined by that experience. Constitutions tend to show a strong socialist influence, reflecting the political strength that left wing parties gained after the defeat of fascism.”

Also, they have a liking for sacrifice:
Get rid of that property;
your owning it is risky:
properties like those are exactly what ruin colonies.
Get rid of that income,
and the other connected with it.

Alessandro Somma, Professor of Comparative at the University of Ferrara, took the task of explaining to us what exactly JP Morgan wanted to accomplish by proposing the reformation of the Constitutions in the European South. “These Constitutions, which marked the end of fascism, aimed to establish a very important principle: Whenever the state deals with the market – and remember, the state always deals with the market – it must do so in order to defend the individual, not the market. It should promote the emancipation of the individual even if that goes against the interests of the market and the doctrine of competitiveness”.

“Those proposals were fundamental –Somma continues –because fascism had destroyed democracy but it hadn’t destroyed the market. In fact fascism was the answer to the 1929 crisis; an answer that sacrificed democracy in the name of the market. Therefore, those antifascist Constitutions put Europe back on a democratic rail.”

We met Alessantro Somma at Rome, while filming the documentary “This is not a Coup”. He quickly pointed out that the JP Morgan’s “requests” for Constitutional reforms, didn’t have any difference from the European Union’s orders. “According to JP Morgan, the markets and the EU Institutions; the European South had to change its constitutions. They should only refer to political, not economic democracy” said the Italian Professor.
A key point of this change was EU’s attempt to impose (through the Stability and Growth Pact) balanced budgets into the legislation of the country-members and, if possible, into the constitutions of those countries.

Alessantro Somma explains that “The balanced budget requirement, signals the prohibition of Keynesian policies. It is some sort of a coup d’etat, since its imposition is being attempted while constitutions that were based on a Keynesian type of wealth distribution are still in force.
Seeing his country’s Constitution adopt the balanced budget principle, the Italian academic argues that in the past, only fascism tried to promote the policies that are being imposed today.”We are witnessing a new economic crisis, but we face it without having understood a thing” he explains and continues: “Today, what happened in 1929 takes place all around us again. Democracy is being significantly diminished in order to save the market. That’s a typical form of fascism.

Back in Greece, reading the eight proposals for the constitutional reform that New Democracy submitted, one could say that they were exact citations of JP Morgan’s reports. The fact that, according to Kyriakos Mitsotakis, the constitution must include “inceptives for the attraction of investments in a secure taxation and insurance environment”, along with the request of opening the path of private market to universities, would make even the most devoted neoliberal analysts of JP Morgan shed tears of joy.

Fofi Gennimata on the other hand, despite being much vaguer in her proposals, meaningfully pointed out that the fiscal impasse “tests the endurance of the modern constitutional state”, allowing us to draw some conclusions.

Of course many will argue (and possibly with a good intention) that the existence of a “government of the left” is a great chance for the strengthening of political and economic democracy at a constitutional level. Unfortunately international experiences show that the Constitution of each country does not reflect the political label each government holds, but the power struggle between social groups and classes.

Let’s not forget that the most democratic Constitution ever known to Turkey (which recognized unions and democratic freedoms) was imposed by the military coup of 1960; because that’s what the relations of production of the period demanded. The same Turkish “pashas”, however also imposed the undemocratic and neoliberal Constitution of 1982, in accordance to Thatcher’s new model and the country’s new position in the international division of labor.

Therefore the question that arises is simple: “In a large Greek colony”, as Cavafy would say, which constitutional reforms will prevail? Those that promote democracy or the ones that JP Morgan and the EU have ordered?