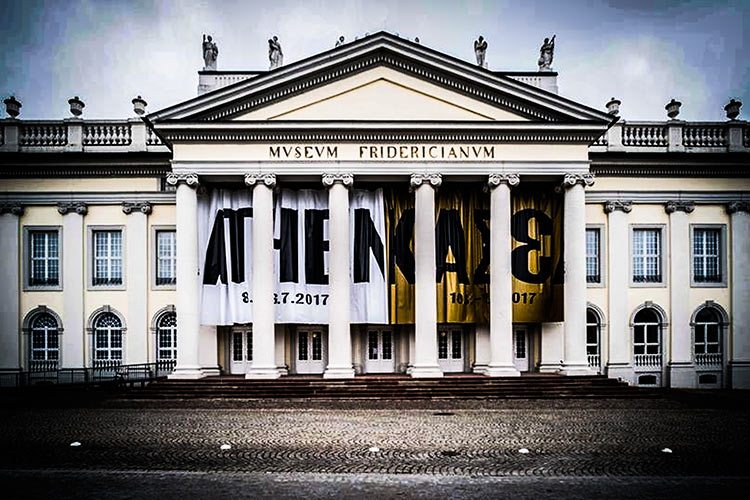 Friday, April 28, 2017
10 am–3 pm Georgia Sagri, Attempt. Come
3 pm Franco “Bifo” Berardi, Questions About the Double-headed Monster That Is Destroying Life on the Planet. And How to Deal with It
3:45 pm Grada Kilomba, Illusions
4:15 pm Tatiana Roque, Back to the Closet! A Backlash Against Emerging Political Subjectivities
5 pm Zülfukar Çetin, Taking Control of One’s Own Body: Refugee Sex Workers and Moralizing the Sex of Others
5:45 pm Angelo Plessas/The Noospheric Society: Invitation for the 6th Eternal Internet Brotherhood/Sisterhood
6 pm María Galindo, Manifesto and How to Deal with the Feminist Insurrection
7 pm BREAK
8 pm–10:30 pm ALLIANCES OF MINOR INSTITUTIONS
Stavros Stavrides, Emergent Common Spaces: Reinventing the Politics of Sharing
Anna Dević/WHW, From Partisan Exhibitions to Exhibitions of Partisanship
Gigi Argyropoulou, (Im)potential Resistances
Emanuele Braga, Beyond work and private property, the Macao experience as an Institution of the Commons
Maria F Dolores and Mata Aharis, Clerking
Vasyl Cherepanyn, Thinking Under Attack: on the International Principles of Contemporary Antifascism
Olga Lafazani, Subverting the Borders Between Host and Hosted. The Everyday Life in City Plaza Project
Chto Delat (Dmitry Vilensky), To be a dissident: screening and questioning
10:30 pm BREAK
11:30 pm Vaginal Davis, No One Leaves Delilah
12:15 am Boris Baltschun and Serge Baghdassarians, Backing track
12:45 am The Boy
(Mattin: Unscheduled Interventions)

The Parliament of Bodies, the Public Programs of documenta 14, emerged from the experience of the so-called “long summer of migration” in Europe, revealing the simultaneous failure not only of modern representative democratic institutions but also of ethical practices of hospitality. The Parliament was in ruins. The real Parliament was on the streets, constituted by unrepresented and undocumented bodies resisting austerity measures and xenophobic policies.
The planet is going through a process of “counter-reform” that seeks to reinstall white-masculine supremacy and to undo the democratic achievements that the workers’ movements, the anti-colonial, indigenous, ecologist, feminist, sexual liberation, and anti-psychiatric movements have struggled to grant during the last two centuries. In this context, The Parliament of Bodies becomes a site of activism, alliance, and cooperation.
After eight months of activity in Athens, The Parliament of Bodies is gathering for the first time in Kassel calling for an anti-fascist, trans-feminist, and anti-racist coalition. The Parliament of Bodies takes W. E. B. Du Bois’s question “How does it feel to be a problem?” as a possible interpellation directed today at the “99 percent” of the planet, taking into consideration the process that African philosopher Achille Mbembé has called “becoming black of the world.” Whereas the modern colonial and patriarchal regime invented the “worker,” the “domestic woman,” the “black,” the “indigenous,” and the “homosexual,” today new government technologies are inventing new forms of subjection: from the criminalized Muslim to the undocumented migrant, from the precarious worker to the homeless, from the disabled to the sick as consumers of the industries of normalization to the sexualized worker, and the undocumented transsexual.
This performative gathering establishes no hierarchies between radically different knowledge, languages, and practices, between activism and performance, between theory and poetry, between art and politics: collectively, we experiment with the construction of a public space of visibility and enunciation. This is a gathering of those who have become a “problem” for today’s hegemonic discourse: we don’t share identities, we are bound by different forms of oppression, of displacement and dispossession more than by our skin color, our sex, gender, or sexuality. The Parliament of Bodies is not made of identities but of critical processes of disidentification.
(Paul B. Preciado)