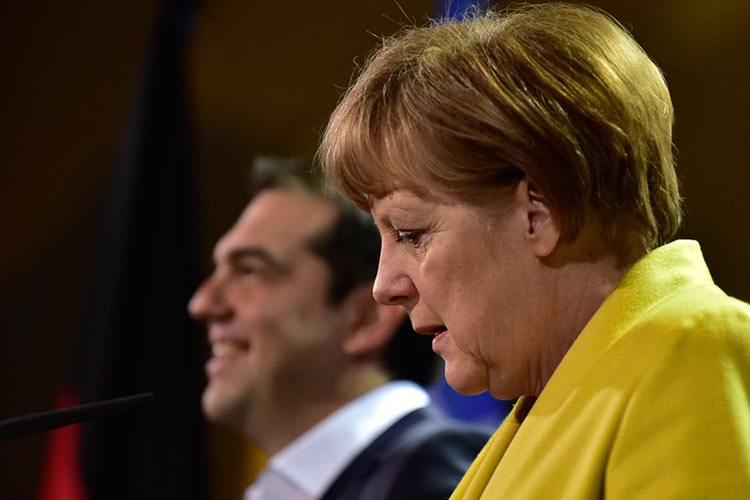 Greece: Back to the Future of Austerity and Debtocracy!

The SYRIZA-ANEL made a deal with the creditors, signed in May 2, that was met with a great deal of enthusiasm from the markets. It is an agreement that will increase poverty and over-indebtedness in Greece, and will deal a blow to the country’s sovereign rights.

The staff level agreement which will be Eurogroup’s green light for the disbursement of the 7 billion tranche “necessary to meet debt repayments which include 2 bn. euros to private creditors due on July 17, and 3,9 bn. euros to the ECB three days later” (Financial Times, May 12), includes:

We should be "reasonably optimistic" about an agreement on Greece, Pierre Moscovici says https://t.co/nPLuH6e6FS pic.twitter.com/aAYxNRB39T

The 7 measures above are only a small part of the total 140 measures that the Greek Parliament members have to vote by fast track procedures like it regularly happens since 2010, when the country first entered the memorandum regime. As a result the ministers don’t even have enough time to go read through the memorandum laws that are always voted during the last moment. All in the name of the state of emergency that has already been around for 7 years, as long as the Coup of the Colonels lasted from 1967 to 1974.

However there is a fundamental difference. The measures that will be voted by the Greek Parliament will be applied at 2019-2020. By then another government will be in power, since the service of the current government, which was elected in 2015, ends at 2019. Also, the 3rd economic adjustment program of 86 billion dollars that was signed in August 2015 (by a government ordered to cancel the austerity and tear up the memorandum) ends at September 2018.

Therefore, neither the creditors (EU, IMF) had the jurisdiction to demand such measures, nor the government alliance of SYRIZA and the far right ANEL had the legitimation to impose them. It is unacceptable for a government to tie the next government with its decisions.

The government attempts to prettify the situation using two arguments: The first is the acceleration of the relief of sovereign debt. The government however has already signed the exclusion of a debt write-off, limiting the possible solutions to a new grace period, debt repayment lengthening and lower interest rates. As a result, debt-wise, the IMF appears to be more radical than the Left and the Far Right government.

The government’s second argument is about relief measures that will be implemented in case the surplus surpasses 3,7% of the GDP. There will be spending for school meals (just so the kids won’t faint at schools), tax reliefs and so on, from the money gathered beyond the 3,7% of the GDP as a reward.

Until then however extreme poverty that affects 13,3% of the population will reach record levels. Recession will continue to shut out any possibility of unemployment reduction from 23% which is the highest in Europe. Under these conditions, the demand for immediate cessation of payments and unilateral debt write off, returns urgently. The government which has recently been congratulated by Pierre Moscovici for imposing 200 reforms against its people, surpassing any previous government, must use the report of the Debt Truth Committee, which described the public debt as odious and illegal to denounce the loan agreements and proceed to a rupture with the creditors: ECB, EU, IMF.

In this fight the people of Europe stand on our side because they know that more than 90% of the rescue loans return to the creditors. We loan to save Deutsche Bank, BNP, Paribas, ABN AMRO and the Greek zombie banks until they were bought by the vulture fund of Paulson.

Any other compromise policy will perpetuate poverty and the abolition of sovereign rights, as it keeps on happening since 2010.

Leonidas Vatikiotis and Aris Chatzistefanou are co-creators of the documentaries Debtocracy, Catastroika, Fascsim Inc and THIS IS NOT A COUP