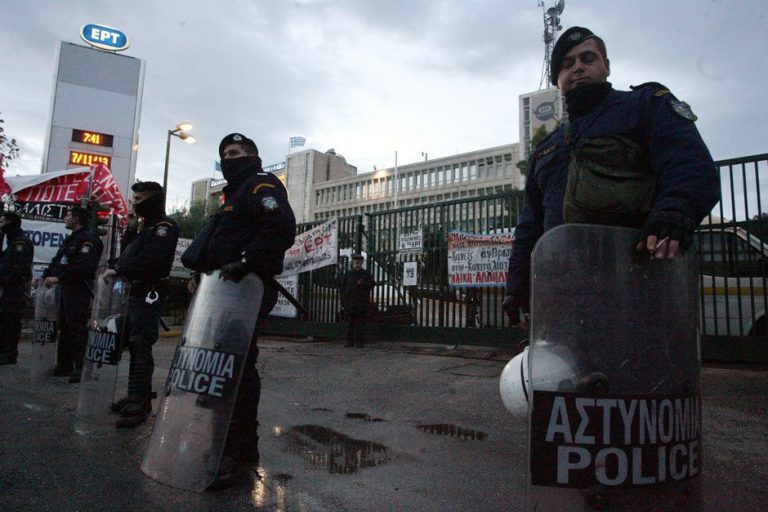 Greece 2013 through the lens of PSI and EPSU

The Elliniko community health clinic has become a symbol of solidarity for people in Greece who are being denied access to universal healthcare. The free municipal clinic has served more than 15,000 patients since it opened in 2011. Though a valiant initiative, run through donations and volunteers, is it a sustainable long-term solution to the pains caused by austerity and privatised health services?

For over five months, journalists, technicians, musicians, news editors and support staff of Greece’s public broadcasting network, ERT, have been occupying their newsroom. In June of 2013 all 2,500 public workers were laid off by the Greek government due to austerity measures. Occupying workers continue to provide 24-hour news coverage to Greek citizens for no pay. PSI-EPSU Communicators’ Action Network, an expert team of affiliate union journalists and communicators from around the world, went to meet with them.

A team of labour journalists, in Greece for a special media project of the global union federation PSI and its European branch EPSU — held the last interviews with reporters and technicians who’ve been occupying and running Greece’s public broadcast station for five months — before police raided their Athens headquarters in the early hours of 7 November. Independent filmmaker Aris Chatzistefanou (InfoWar) was on-location at the time of the raid, and produced this new video report.

Public workers who deliver water services in Athens and Thessaloniki are working with community allies, including “Save Greek Water,” and EPSU – the European arm of Public Services International, to keep public water systems in public hands. The government is trying to privatise and sell off these vital services under austerity measures. More than 38,000 Greek citizens have signed the EPSU-led European Citizens’ Initiative demanding that the Human Right to Water be implemented through public services.

There were 18,000 tax administration staff in Greece before the economic crisis. Austerity measures have forced a 50% cut in staff — at the end of 2013 there are just 9,000 workers. Which may partially explain why the Greek state has failed to recover €60 billion in taxes this year. We’re not talking tax evasion, but fees declared or requested by the Ministry of Finance that people are unable to pay or that tax authorities have been unable to collect.

PSI-EPSU labour communicators report on their visit to public tax administration offices in Greece, in early November 2013. A tax union representative gives an eye-opening tour of an under-resourced system where remaining tax workers struggle daily to apply countless new regulations, but run out of ink to print even basic forms.

The global union federation Public Services International joins Greek workers taking to the streets on 6 November 2013 in a general strike to protest the continued cuts to decent jobs and public services imposed by the ‘Troika’. In return for continued financial assistance, Greece has agreed to cut up to 40,000 public workers over the next two years.