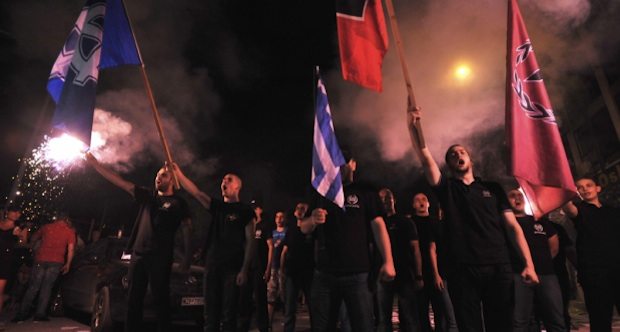 Fascism Inc: Greece and the Rise of the Extreme Right in Europe

In Greece and other European countries, economic elites have been supporting fascist parties in order to enforce a radical neoliberal agenda in the crisis, says Aris Chatzistefanou, journalist and filmmaker from Athens, director of “Debtocracy”, “Catastroika” and “Fascism Inc”.

Fascism Inc.: How Economic Elites Support Fascist Parties in Europe – Today and in the Past

In his new documentary “Fascism Inc.”, he shows how industrials and bankers in the 1920s and 30s supported fascists in order to destroy socialist movements and trade unions. Today – again in times of crisis – this pattern reoccurs at the periphery of Europe: In Greece, extreme right wing parties like “Golden Dawn” and “LAOS” have been supported by big shipowners and media corporations. Meanwhile in Ukraine, the EU, the US and the IMF support a government with the participation of the Neonazi party Svoboda in order to enforce their economic and geopolitical agenda.

European austerity policies are laying the ground for the rise of fascism in Europe. Greece is on its way to become a “Third World country”, says Chatzistefanou. Public health and education systems have already been largely destroyed, while public debt has risen from 120 per cent of GDP to 180 per cent since the beginning of “rescue measures”. At the same time, Greek parties like “PASOK” and “Nea Dimokratia” are adopting positions from the far right, especially in migration policies. According to Aris Chatzistefanou, there is a real danger that Greece can become a model for Europe.

The Reality of the Greek “Success story”: Greece on Its Way to Become a Third World Country

While prime minister Samaras speaks of a “Greek success story” reality looks quite different: Public debt has increased from 120 per cent of GDP to 180 per cent. The suicide rate is soaring. The public health and education systems have already been largely destroyed, says Chatzistefanou. According to physicians existential fear and poverty would lead also to a heavy rise in cardiovascular diseases – often with deadly consequences. The alleged primary surplus were fictitious as government debts – including unpaid salaries – were not taken into account. The left – including Syriza – would only be able to counter neoliberal policies if a massive social movement will support a progressive government as in parts of Latin America.