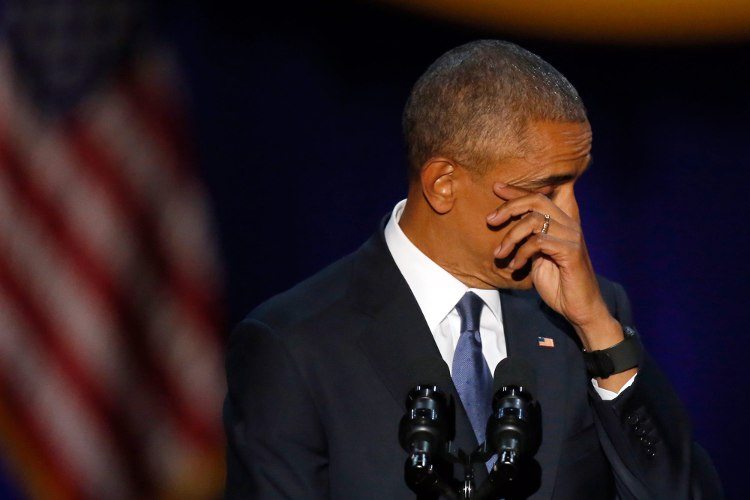 Farewell to … weapons by Barack Obama

How many lies can fit in a farewell speech? If you are the US president who won the Nobel price while only in your last year in presidency you have managed to bombard simultaneously seven countries by dropping 48,819 bombs, the answer is … many lies.

Under the music of U2 in the background, Obama attempted to present a false picture of prosperity and security for the US citizens and the US economy.

He had not mention, of course, that, for the first time in the last 25 years, the life expectancy of the US citizens has been reduced, while the American youth sees its incomes decreasing. For a young American, the only positive indexes under Obama presidency, are the deaths from drugs and the rise of national debt which will transform a whole generation into servants of the bankers. The enlargement of inequalities together with the transformation of a huge part of the population into a kind of servants with low-paid part-time jobs, Obama had indeed several reasons to weep in his farewell speech. However, the tears in his eyes were tears of joy.

The biggest problem for humanity, is that by following the orders of the economic, political and military establishment, the last days Obama attempts to create pre-fixed conditions both for the interior and for the foreign policy of the US superpower. The development of US troops that will be permanently stationed in Poland, for the first time in history, is a clear message of war to Moscow.

This action is taking place between the end of US elections and Trump’s inauguration, despite that the decision has been taken a year ago. This shows that the US establishment is not satisfied just by the war climate created by the new US president against China. The establishment wants to keep an open front against Russia too.

During the last week, Obama rushed to broaden the surveillance powers of the NSA. Through the new orders, NSA can share with other 16 agencies huge amounts of data from around the planet. Through this way, the last internal control mechanisms of the intelligence services will disappear, as well as, all discrimination responsibilities. Just think that, it has been revealed in 2014 that the NSA is capable of recording and examining 850 billion files of phone and internet communications. One can easily understand that, one of the biggest “parties” of the intelligence services in the history of humanity, has just started.

Leaving the White House, Obama has created the conditions through which Trump can govern as a totalitarian dictator without the need to pass any new law. Internationally, Obama leaves behind a network of military bases in 138 countries that will allow the US special forces to operate instantly throughout 70% of the planet. Those US enemies that will not be killed by the thousands of drones developed by Obama, could be captured and imprisoned in Guantanamo which remained fully operational, through the CIA kidnapping network.

Inside the US, the police militarization that has been accelerated during Obama terms, as well as, the increase of military operations inside the cities (with the general rehearsal of curfew in Boston), delivers to the next president a Praetorian army, capable to crush any social resistance through a bloodbath. Ten thousand people have been murdered by the police after 2009 and two million people rot in US prisons (the United States under Obama has now more prisoners in absolute numbers, even than China). This is a situation that many of the biggest dictators of 20th and 21th century would want for themselves.

Trump will find difficult to expel more than three million immigrants, like Obama did, breaking every historical record. He will further realize that the wall that has promised to his voters has already been built, either through a natural shape, or through electronic means of border surveillance.

In the economic level, Trump also receives a ‘well-plowed’ field for the 1% of his richest fellow citizens. When Obama took power, the 400 richest Americans had a combined fortune of 1.57 trillion dollars, while today, they bid farewell to the black president with 2.4 trillion dollars in their pockets.

Some predecessors of Obama, would certainly exhibit worse ‘achievements’ in specific sectors. However, it is difficult for us to remember someone who has ‘triumphed’ in so many fields: bombarded so many countries, signed such a high military budgets, executed and tortured through extrajudicial decisions so many people, helped the financial system to enlarge inequality between the rich and the poor to such extent, recorded so many conversations between people, fiercely hunted down the whistleblowers of these actions.

Obama has lifted the standards of the ‘beast’ so much that even someone like Donald Trump would have to surpass himself in order to become the worst president in the history of the United States.