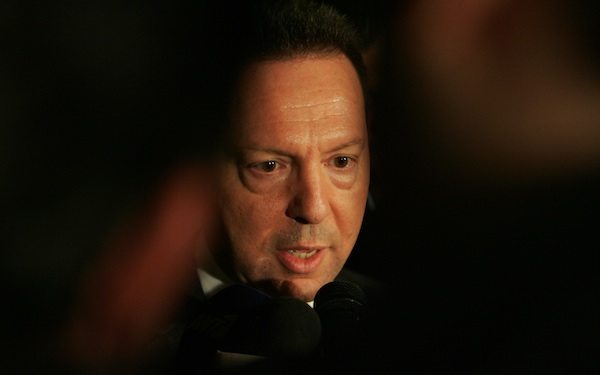 What was the trend in the last decade of the 20th century that ensured the dominance of neoliberal doctrines of capitalism across the planet? If your first response is the collapse of the former USSR and the Eastern bloc, think again. Behind the celebrations and observations about the alleged domination of liberal bourgeois democracy, one of the biggest attacks was held on peoples’ rights to control even falsified, through representatives, the economy of their country.

Sawing off the branch on which it sat, the political establishment across the world began to offer different levels of independence to central banks. The political establishment obeyed to the dominant view among market participants, according to which, politicians through the provision of benefits to the people, cause extreme cyclical fluctuations in the economy, which only an independent central banker could balance. In fact, politicians, apart from the twig on which they sat were also sawing the tree of democracy. “The independence of central banks”, Naomi Klein explained to me a few years ago, “is the mechanism by which markets explain to the politicians that they cannot play with their toys. It is the most important evidence that the markets are in an open war with democracy.”

The European Central Bank not only could not be an exception in this situation but soon became the most ruthless “economic killer” who acted on behalf of commercial banks of countries such as Germany. Using the central bankers of member countries as a “fifth column”, ECB managed to impose its positions in parliaments of weak countries when needed to overrule the governments that did not cooperate.

The fact that the European Union lacks political control mechanisms on such institutions, leaves ECB completely uncontrolled. In the US, where the FED enjoys the same “independence”, would be considered unthinkable for the central banker to come into conflict with the interests of the federal government, for example by refusing to buy Treasuries to help the national economy to emerge from a crisis. Unlike in Europe, the ECB has refused several times to listen to the wishes of even the Eurogroup, declaring allegiance only in Berlin, or, in specific financial institutions.

As Barroso’s former advisor Philippe Legrain revealed to the Greek Truth Commission for Public Debt, the refusal of ECB’s previous president, Jean-Claude Trichet, to consider any potential restructuring of Greek debt in 2010, was aimed solely at rescuing certain French and German banks which were particularly exposed to Greek debt.

As the debt crisis deepened, leading the economies of the European region in hostage under the respective central banker of the eurozone, the ECB clearly took the role of an “economic hitman”. While Washington had access, during previous decades, at CIA to ensure its dominance in South America, Berlin began in 2008 to entrust ‘destabilization’ operations to the ECB. The dress rehearsal held in Ireland in 2010, when Trichet openly threatened the government that it would cut funding of the banking system, forcing Ireland to exit eurozone in case it would not accept the “offer” loans from the EU, IMF and the cruel austerity measures imposed. The total amount that the Irish tax payers called to pay for this agreement was EUR 64 billion, or about 14,000 euros per Irish citizen.

This silent “coup” was successfully repeated in Cyprus when Berlin decided to get over with regional economic havens and gather control of black money into more controlled regions in Europe. And of course the same threats from the ECB were repeated several times in Greece, every time that the terms of the new loan agreements had to be set.

The ECB mechanism, in close cooperation with the central bankers of the eurozone members, was now completely out of control, interfering in the internal politics of sovereign states. The next step, namely the overthrow of an elected prime minister, it was just a matter of time to occur and was first tested in Italy.

In the summer of 2011, through a simple letter-ultimatum to Silvio Berlusconi, Trichet and Draghi called for implementation of harsh austerity measures in order for the ECB to buy bonds of the Italian state and save the country from imminent bankruptcy. Serving specific sections of the bourgeoisie in Italy, which were suffocating under the monetary policy of Berlin, Berlusconi spoke openly about the possibility of exit of Italy from the eurozone and several bankers within and outside Italy were requesting his “head on a plate”.

As the Financial Times revealed last year, the summer of 2011, Italian President Giorgio Napolitano called the technocrat, former employee of Goldman Sachs, Mario Monti, in his office under absolute secrecy and asked him whether he would be ready to replace the elected prime minister. According to the Financial Times, the message given to Monti, was that he would be called to govern, as soon as the spread of the Italian bonds, which at that time ranged at 200 units, exceeded 300. The soaring spread and the precipitation of Italian bonds was done through a series of skilful movements by the ECB president Mario Draghi (coincidentally or not, another former executive of Goldman Sachs).

The ECB was sending a clear message that those governments who do not follow the orders were risking to be thrown in the dustbin of history, just in a few weeks.

The work of ECB could not, of course, mark such a success without the active support of the central bankers of the EU member states, which in most cases act as agents of the decisions taken in the central headquarters in Frankfurt. This, of course, does not have to do with some personal treason, but with a reflection of the prevailing balance between the economic elites of the eurozone countries with the powerful economic centers of Europe. The more dependent and parasitic is the bourgeoisie in a eurozone country, the more the man who puts as central banker will express his allegiance to the ECB. His “independence” actually ensures that he is unaccountable to any democratically elected institution, and thus attached to the strongest (and most lucrative) piece of the economic elite each time.

There were of course a few times when the government of a country which for various reasons decided to deviate from the mandate of the ECB, preoccupied with the local central banker. The right-wing government of Hungary gave a battle for months to force the central bank governor András Simor to leave his position, through which functioned essentially as a representative of the country’s creditors. The EU and the ECB used their entire arsenal to prevent the removal of Seymour, going so far as to threaten Hungary even to suspend country’s right for voting in all institutions. At that time they remembered government interference in the freedom of press, a case which until then, no one in the corridors of Brussels bothered to investigate.

The government of Cyprus was also in open war with the central banker. With the outbreak of the crisis in 2012, the coldness of relations between President Christofias and the central banker A. Orphanides evolved into an open war as the former realized suddenly that he does not control the country’s banking system during one of the most crucial moments of the modern Cypriot history. Once again, Frankfurt of course stood openly on the side of its own man, who exerted pressure to impose new austerity measures. Christofias was forced even to refer him to the general prosecutor (accused for the manipulation of official data) to achieve his removal, when it was already too late.

The question naturally arise: After all this, why did the SYRIZA government in Greece, permitted Yannis Stournaras to continue be in charge of the Greek economy?